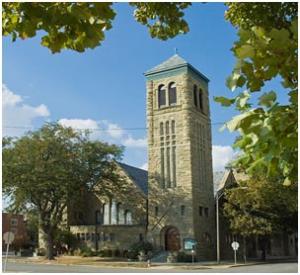 First Presbyterian Church was organized in 1852. The present downtown building was erected and dedicated in 1892. Since its founding, the congregation has been committed to thoughtful worship, education opportunities and helping others.

First Pres. continuously advocates for social action and civil rights and seeks to develop relationships with other cultures and faiths in our community. We participated in the 1960’s Selma march and sponsored refugees from the former Dutch East Indies, Hungary, Korea, Cuba and Vietnam. We came together with other churches for a Picnic for Peace during the situation in Ferguson, joined with the Decatur Islamic community to collect donations for Syrian refugees and the WSOY food drive and hosted a community prayer vigil for Orlando shooting victims.

First Presbyterian is concerned about our environment and practices good stewardship of the Earth with a recent focus on reducing the use of plastics. 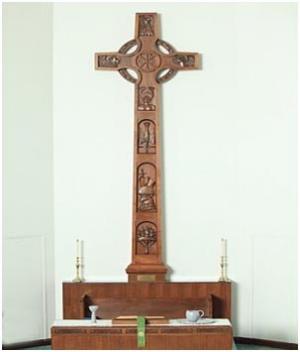 The Communion table in the center of the chancel is engraved with wheat and grapes, symbolizing the Eucharist as the central act of Christian worship. Above it on the front wall is a large Celtic cross (see page 8), a traditional symbol of Presbyterianism. Flanking the cross are two large candles, known as Christ candles, reminding us that Jesus is the Light of the world; one represents His human nature, the other His divine nature.

The baptismal font on the left or south side of the chancel symbolizes entrance into the Christian church. Topping the baptistery is a descending dove, symbol of the Holy Spirit. The raised pulpit on the right side represents the importance of preaching in Protestant worship. A large King James Version of the Bible rests on the pulpit, reminding us of the Reformation. On the main floor at the entrance to the chancel, a peace candle on a stand is a reminder of the presence of God.

Banners depicting nine statements of beliefs from the Presbyterian Book of Confessions are displayed on the walls of the nave, surrounding the people as they worship.